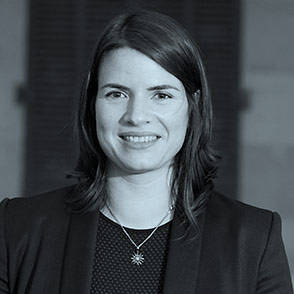 Graduated in Psychology from the University of Deusto (2005) and doctor in Medicine from the University of Barcelona (2009). In her doctoral thesis, directed at the department of Psychiatric and Clinical Psychobiology at the University of Barcelona, she studied cerebral limbic changes and their implication in the emotional, olfactory and memory dysfunctions that suffer the patients with Parkinson disease through resonance magnetic imaging (RMI). In 2007, as part of her predoctoral training, she made a research stay in the Oxford Centre for Functional Magnetic Resonance Imaging of the Brain (FMRIB, University of Oxford, UK). In 2010, after she doctored, she received the Lluis Barraquer i Bordas award for the best PhD thesis. Subsequently, she continued with her specialization as a postdoctoral researcher at the Department of Neurology at the Clínic Hospital, Neurodegenerative disorders network in the research center (Centro de Investigación en Red de Enfermedades Neurodegenerativas, CIBERBEN). Currently, she is studying topics related to neuroimaging and to neuropsychology associated with Parkinson disease and multiple sclerosis, being the principal researcher of two projects within the team of Neuropsychology of severe medical disorders (University of Deusto). She is a professor in the Faculty of Psychology and teaches courses in the degree of Psychology, as well as in the Doctoral Program at the University of Deusto and in the official University Master in Clinical Neuropsychology, in which she is the director.